On stage at the Computer History Museum, the iconoclastic Peter Diamandis said, “We’re living in a day in age where almost anything you can imagine…can become real.”

It’s a shared belief  at Singularity University where the mission is to empower social entrepreneurs, equipped with the World’s most advanced technologies, to tackle the World’s greatest grand challenges — in order to collectively build a better future.

This is now my third year in a row coming back to Singularity University since I graduated from it myself in 2011, and I have been grateful to have had the opportunity to return in these past years in the capacity as a speaker, mentor, and lean startup adviser to the program, and it’s an experience that is incredibly fulfilling. SU’s Graduate Studies Program (GSP) is  the flagship annual summer program which brings together 80 of the World’s (i.e. over 35 countries) most innovative social entrepreneurs to live, learn, and work together at NASA in the heart of Silicon Valley.  It truly is like space camp for tech-nerds who want to maximize positive impact via tech entrepreneurship. Singularity University is a future-lovers haven, and the GSP is great because it serves as a microcosm of Silicon Valley’s rich innovative ecosystem — it is like baking in a dream oven for 10+ weeks each Summer.

The kind of moonshot thinking encouraged and taught by Singularity University has already made an extensive impact in the World, and the optimistic positive impact vision of SU has even spilled over to other more traditional startup accelerators such as Y-Combinator — which up until recently specialized in cranking out app after app after app designed to solve an incremental niche-need and show strong early customer growth above all other priorities. Now even Y-Combinator has a special track for the start-up projects tackling global grand challenges — a vision that SU has pioneered these past 6 years and a vision which is thankfully spilling over into the broader “tech world” here in Silicon Valley. What the GSP14 startup teams have accomplished in only 3 weeks time is truly amazing. Carbon nano-tube tricoder medical device anyone?  Howabout an intelligent maxi-pad that tracks a women’s menstrual blood and syncs to your iPhone? How about re-imagining hearing aid devices to bring life-saving augmented-reality to the growing elderly population? How about the World’s first crane-mounted frameless 3D-printer? Turning gas cars into hybrid vehicles for less than $2k? — yep, they did that too. These are just some examples of what these companies and entrepreneurs are accomplishing now. This year I was honored to serve as lead facilitator for SU’s internal Startup Weekend which kicked off the team project portion of the Summer Long program (the first weeks having been dedicated towards learning about the state of the art in exponential technology domains, and also learning about the World’s greatest grand challenges).  The Startup Weekend served as the critical turning-point in the Summer — it ushered in an epic moment of Action. It was a wake up call for many, and it happened only 3 weeks ago. And during that weekend, the teams formed and had 48 hours to develop an idea and find some traction with it. Needless to say, when 85 genius entrepreneurs from 35+ countries form teams — it can be a drama-filled, complex, and kneejerk experience.

More than anything, Singularity U is a celebration of ideas, but not just any ideas — ideas that can produce positive impact. Now, 3 weeks after the Startup Weekend wake-up-call — it is D-Day at SU, and the teams are gathering here at the Computer History Museum to showcase their work in front of hundreds of Silicon Valley’s leading thinkers, innovators, and investors. Some of the projects that began during the Startup Weekend have blossomed into investment-ready start-up ventures, other teams scratched their initial idea and are now fully entrenched in ventures completely different to what they initially imagined last month — and yet it is difficult to tell which are which. Indeed, the last 3 weeks has been a sprint to end all sprints, with some ideas and prototypes emerging as few as 4 days ago and yet still impressive. What is clear is that ALL of the projects have pivoted in some critical way, and some of the moonshot ideas are more articulated than others — all are noble, most are promising.

Before the big stage at the closing ceremonies, SU had an internal selection process where the 23 team projects were narrowed down to 5 which presented to the World on the big stage. It was a difficult decision when narrowing down the projects and there great promise in at least twice as many.

So here they are, the startups from Singularity University’s GSP14 in their own words:

Arcturus Bio Cloud (arcturus.io):  The community and marketplace for biotech.

ASAP (asapsolutions.biz):  Delivering locally sourced situational awareness in the first phase of emergency and disaster response. We use a smart extension for UAVs paired with a global emergency response network.

besense (besense.co):  Developing a revolutionary smart-pad built to measure selected biomarkers in menstrual blood to discover, diagnose, and provide valuable insights to the health of women.

Bibak (bibak.org):  Bibak’s podtector is a landmine detector that is effective, cheap and can be assembled on site. It is delivered in a way that is sustainable, coordinated, and community-led.

Cookie:  The new report card. It is constructive, active and intelligent. It analyses grades and also student’s interests, emotions and skills and provides personalized advice to improve or advance in each subject. It engages and empowers children, teachers and parents to provide a more personalized learning experience to each student leveraging what they love.

Exponential Motor Company (exponentialmotors.co):  An easy-to-install, cheap retrofit kit that gives hybrid-car capabilities to traditional, light, front-wheel cars…enabling savings of 30% or more on fuel and cutting emissions at least by a third. We turn gas cars into hybrid cars.

Learny Lab (learnylab.com):  An AI technology for kids enabling them to learn by teaching. LearnyLab platform helps primary-school children with their homework.

Literise (literi.se):  Low-literacy is the biggest cause of social and economical exclusion in the World. Low-literacy affects 20% of the developed and 50% of the developing world. Literise uses literacy analytics to empower educators to improve literacy efforts. Developed in the Netherlands, Literise has partnered with Samsung and Deloitte to accelerate rollout globally.

Memora (mymemora.com):  Memora is a life-logging camera that applies the power of computer vision and deep learning to point-of-view imagery. it allows you to seamlessly track your diet and provides you with adaptive recommendations.

Mitera (miteraphc.com):  We are building a device that allows early disease detection through weekly, in-home saliva analysis using nanotechnology. Through the collection of continuous, non-invasive health data we can identify undiscovered biomarkers of disease, monitor their changes over time and create a deeper understanding of the human body.

Mpower (mpowernets.com):  Mpower enables electrical vehicles to serve as a storage solution for a sustainable grid operation. We provide a state-of-the-art bi-directional portable electric vehicle charger which enables additional grid storage capability by connecting the car battery. By optimizing the energy consumption and accelerating the energy onsumption, we balance the demand and supply operations while the owners of electric vehicles earn money and have a better charging experience.

Mendelian (mendelian.co):  We are on a mission to eradicate hereditary diseases which affect 200 million world wide, with each disease displaying significantly different epidemiological patterns in each region (eg. 5% of population in India). While genetic screening is available in developed countries, current procedures and technologies are unfit for the low and medium income countries (LMICs). Mendelian is developing an easy, affordable and scalable pre-meeting genetic compatibility test for LMICs.

Neurofy (neurofy.com):  Building the first non-invasive approach for personalized treatments of Alzheimer’s patients. We use games as a way to collect cognitive data and to understand how and when cognitive loss happens in the brain in order to delay the disease.

NuTerra (nuTerra.io):  Visualizing a sustainable future, we work in the convergence of space and the environment. With space technologies becoming rapidly more accessible, and the capabilities of satellites doubling every 18 months, we have access to more frequent information from every more powerful sensors. At nuTerra, we are creating tools that can turn satellite images into metrics over time.

Peared (peared.co):  A lifestyle company focused on seniors. Our first product is “Bridgey” — a smart ear piece designed to enhance hearing, monitor health and boost memory by providing everyday contextual information. We will disrupt the hearing aid market through disintermediation and advanced technologies. One of the class reps, Alexandre Terrien of Havard, pitching his startup project: Peared which is disrupting the hearing aid market with augmented audio reality.

Qynd (qynd.me):  A growth monitoring system measuring infants’ physical measurements using 3D scanning. The system is comprised of a standalone device which uses four 3D depth sensors and is equipped with an electronic scale. The device is bluetooth enabled and uses external devices for interface (phone, tablet, pc). By creating an array of sensors covering 360 degrees of the central area we are able to take a 3D snapshot of a moving object (ie., an infant) with great detail.

Reload (reload.co):  Integrated experience from a monthly, at-home collection of a few blood drops to an IT system that correlates biochemical and genetic markers, identifies potential imbalances and provides actionable recommendations on nutritional, supplement, and lifestyle needs.

SixDegrees (sixdegre.es):  A smartphone app to help people meet each other and perhaps help each other with dix degrees of seperation through video collaboration. This allows people around the World to come together and collaborate in raising awareness for social causes.

TriDom (tridom.co):  A retro-fit kit and work tool for cranes. The World’s first frameless 3D printer. This will transform any crane in the world into an automated tool for printing multi-story buildings that can function as houses and small businesses. The crane will handle 80% of the movement and precision and the kit would handle 20%. Also, the cranes could be mobile or static ones, preferably hydraulic. Already have partnerships with construction, concrete, and crane companies.

In speaking with GSP14 participants, it is very clear that above all of the drama this Summer — and there was drama among almost all of the team projects (including the inevitable late night hookups, team-formation politics and leadership clashes) — everyone believes the experience to have been an amazing one. In closing the ceremonies, Ross Shott asked the GSP14 participants a simple question:

“Raise your hand if you genuinely fell in love with another human being this Summer.”

Every member of GSP14 raised their hands. That’s 85 people from 35 countries down — and a Billion to go. Peace, Love, & Abundance to all!

To see videos of all of the presentations, visit here:  http://singularityu.org/graduate-studies-program/2014-team-project-videos/

And enjoy some pictures me, getting some electrical volts humming into my pre-frontal lobe to improve focus and awareness. SU also stands for “sleepless university” 😉 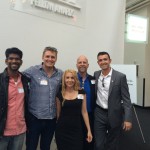 Singularity Alumni VJ (Get Around), Brad (MoonExpress and Made in Space) along with trustee Robin, Director of the GSP Ross Shott, and myself 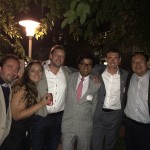 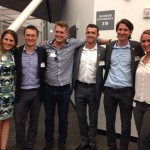 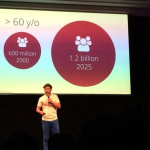 One of the class reps, Alexandre Terrien of Havard, pitching his startup project: Peared which is disrupting the hearing aid market with augmented audio reality. 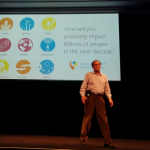 Ray Kurzweil — founder of Singularity University and Director of Engineering at Google. 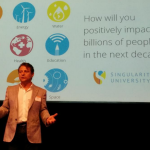 Peter Diamandis, co-founder of Singularity University, on stage at the closing ceremonies. 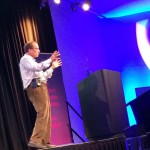 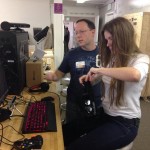 Members of Hoope in the labs experimenting with the Occulus rift. 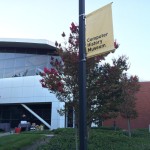 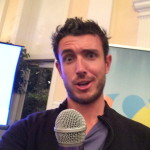 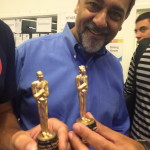 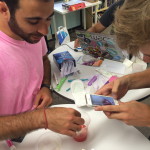 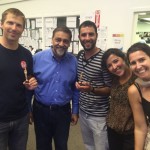 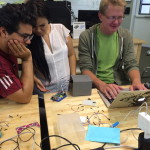 One of the project teams building a medical device. 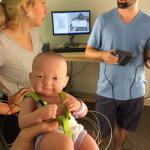 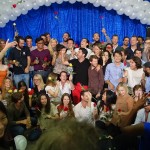